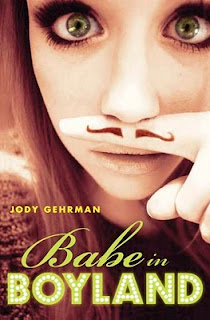 Description: "When high school junior Natalie--or Dr. Aphrodite, as she calls herself when writing the relationship column for her school paper--is accused of knowing nothing about guys and giving girls bad relationship advice, she decides to investigate what guys really think and want. But the guys in her class won't give her straight or serious answers. The only solution? Disguising herself as a guy and spending a week at Underwood Academy, the private all-boy boarding school in town. There she learns a lot about guys and girls in ways she never expected--especially when she falls for her dreamy roommate, Emilio. How can she show him she likes him without blowing her cover?"

Warning: Contains SPOILERS!
I am a sucker for a good gender-bender (my favorite shoujo manga ever, just happens to be Hana-Kimi), so when I heard about "Babe in Boyland" I simply had to read it.

Well, it's a fast, light and fun read (I laughed out loud a lot) but it lacks originality as the core story is basically the same as the aforementioned Hana-Kimi. Still it's pretty funny and I liked how Natalie's perceptions change with her experience.

Natalie, a high-school junior who writes a love-advice column for the school paper, gets criticized because her articles are too one-sided.

When she realizes her critics (mainly boys) are right she decides an undercover assignment is needed and enrolls (by dubious means, I must say) in an all-boys intern school called Underwood. She shares a room with a hot guy named Emilio. And well, that's it. It's, like I said, almost the same plot as Hana-Kimi - Mizuki, the manga heroine enrolls because she wants to go to school with her sports idol who happens to go to an all-boys school, but the setting and situations are the same, really.

Except that while Hana-Kimi spans for 23 volumes and develops the romantic story slowly and believably, "Babe in Boyland" proposes to do the same in less than 300 pages, so the two protagonists only have about a week to get to know each other and fall in love. Which is NOT believable especially since Natalie is disguised as a boy.

Most of the characters were walking stereotypes (jocks, geeks, etc) and most of them never get enough "booktime" for us to really know more about them than their labels. One of them even gives Natalie a "social tour" of Underwood "a-la-10-Things-I-Hate-About-You".

Overall this was a fun (I'm using this word way too much to describe this book, ahah - but it was hilarious at times) read but it lacked depth in the story and character department. Everything happened too fast to be... well, believable. Still, it makes a great read for younger readers and if you liked this book I strongly recommend checking out Hana-Kimi, the japanese manga by Hisaya Nakajo.
View all my reviews
à(s) março 08, 2011

I loved HanaKimi! It was one of my first mangas and it's one of the reasons I love manga even today. And you're right, one of the strong points is that the characters have enough time to develop something believable, and if this books tries to do that in a week, then that's bad, although I highly doubt they can get much wrong with this type of premisse. At least it should be good for some laughs. :)

Hana Kimi is great! I'm slowly buying all the books (I seem to be fond of longer mangas - Bleach, Hana Yori Dango, Hana Kimi, The Wallflower, Kimi ni Todoke), but I don't know if you've seen on my bookshelf tour, I have quite a few already (I'm so proud, eheh)! It's such a sweet love story and Mizuki is cute and Sano is dreamy. Have you watched the live-action series? It's also pretty good!

This book is definitely funny, especially when Natalie has to go to the bathroom and sees naked males everywhere and she can't use the urinols. Lol. But everytime I read about that I flashedback to Hana Kimi. :p